Simon Hayes ran his own business based in the New Forest for 20 years before an interest in criminal justice prompted a career change in 2005.

Simon was the first Police & Crime Commissioner for Hampshire & Isle of Wight in November 2012 -2016. He studied Criminology and Social Policy, for which he holds a BSc degree; he has worked with an interest in preventing offending and re-offending, particularly associated with crimes linked to drug and alcohol abuse.

Simon is the Founding Director of The Social Change Society CIC, a social enterprise established to reduce the risk of early offending through the use of an evidence based, early intervention approach, delivering alternative ways of behaviour and attitudes away from offending tendencies, and most importantly offending influences. Simon is committed to this process of social change with an emphasis on preventing crime, reducing re-offending and protecting the vulnerable.

He has devised and influenced effective governance structures and overseen change within statutory, charitable and business organisations, recognising the importance of credible structures to deliver legitimacy, efficiency and innovation.

With a recognised understanding of financial management and budgetary controls, he is also experienced and comfortable with scrutiny and challenge.

He is very adept at building/energising teams and partnerships to meet challenging corporate objectives. Colleagues recognise him as inclusive, objective, analytical, perceptive and incisive. As an experienced trained communicator and public speaker, with well established press and media experience, able to interact at all levels.

Simon is currently President of Romsey St John Ambulance, Chair of Youth Options Charity and Trustee with The Hampton Trust, Hampshire Gardens Trust and the newly formed DayHab Project in Winchester. He is also an Advocate at Trinity Winchester, the Charity supporting the homeless and an Ambassador for UK Shaolin Temple.

Prior becoming Police Commissioner, Simon was a National Board member of CrimeStoppers and Chairman of the Charity’s Hampshire & the Isle of Wight Committee. He is also a past Chairman of the Hampshire Police Authority, Leader of the New Forest District Council and a County Councillor for Hampshire. He’s previously been a Samaritan Volunteer in Southampton, Trustee of The Blue Lamp Trust, FootPrints Project and New Forest & Southampton Mediation.

His interests include Narrow Boats and his Land Rover Series 3. 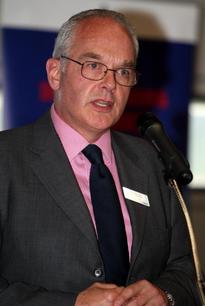 "....too many futures are shaped by failures of the present"